On the cover of Van Halen’s 1978 eponymous debut album, Eddie Van Halen thrusts his black-and-white striped Strat®-style guitar towards the camera as if he’s showing you the future. He played this guitar on his unprecedented and mind-blowing “Eruption” guitar solo, thus its nickname, and almost immediately, this monumental instrument became a timeless icon, symbolic of a paradigm shift in guitar-driven rock and roll.

Back when this trailblazing album first appeared, nobody had ever seen or heard a guitar like that because no such guitar ever existed. What was this? You couldn’t buy one.

That’s because he made it himself. The 22-year-old Eddie Van Halen had the mind of not only a great musician, but also of an innovative inventor—a constant tinkerer who was always messing with his gear. Eddie would say it was out of necessity as no off-the-shelf guitar had the features he needed to really do his job and realize his full potential. So, he took matters into his own capable hands — refretting the neck, installing a humbucking pickup which he potted in paraffin wax, as well a single master volume knob (famously labeled as “Tone”), brass nut and tailpiece from a ’58 Strat, cutting out and mounting his own homemade black and of course, coming up with iconic striped motif.

The all-new EVH® Striped Series ’78 Eruption guitar combines many of those famed mods along with modernized features and a relic treatment.

The Stratocaster®-style body sports Eddie’s famed white-and-black-striped paint job and has been paired to a quartersawn maple neck with a hand-rubbed satin urethane back finish. The 12”-16” compound radius maple fingerboard with 22 jumbo frets was designed for fast and furious playing styles with maximum comfort, while a heel-mount truss rod wheel makes for time-saving neck adjustments. 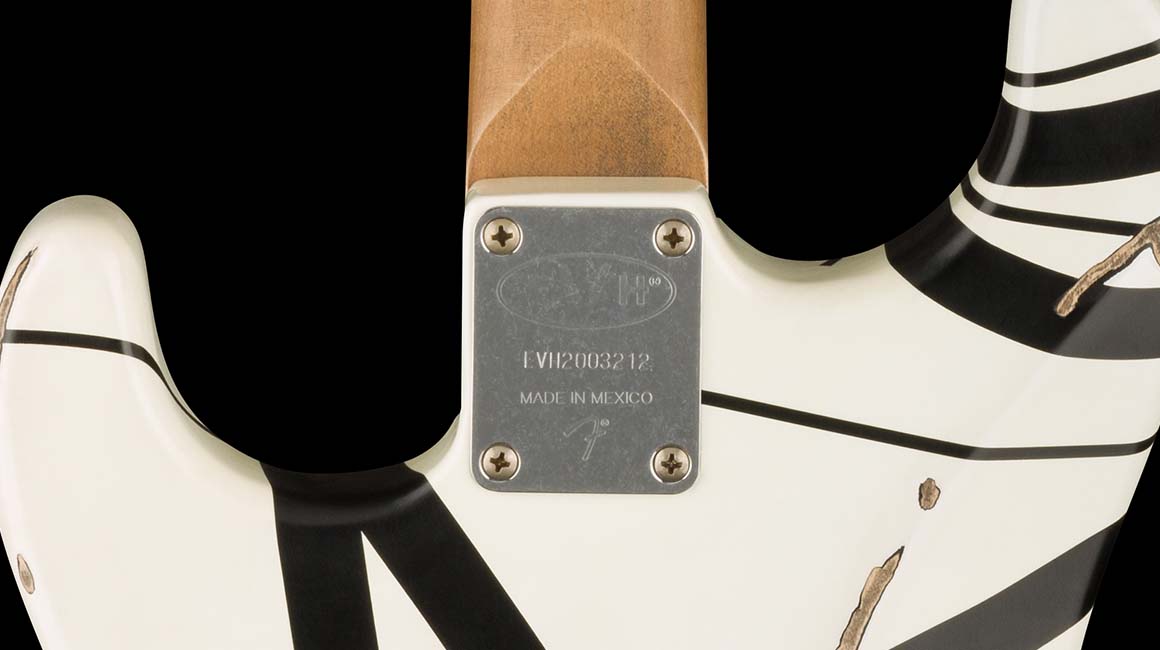 Bolt-on is a type of neck construction that joins the maple neck to the body of the guitar with screws or bolts, resulting in bright tone with more control. The quartersawn grain runs the length of the neck and as well as being visually appealing, is less susceptible to shrinking, warping or splitting 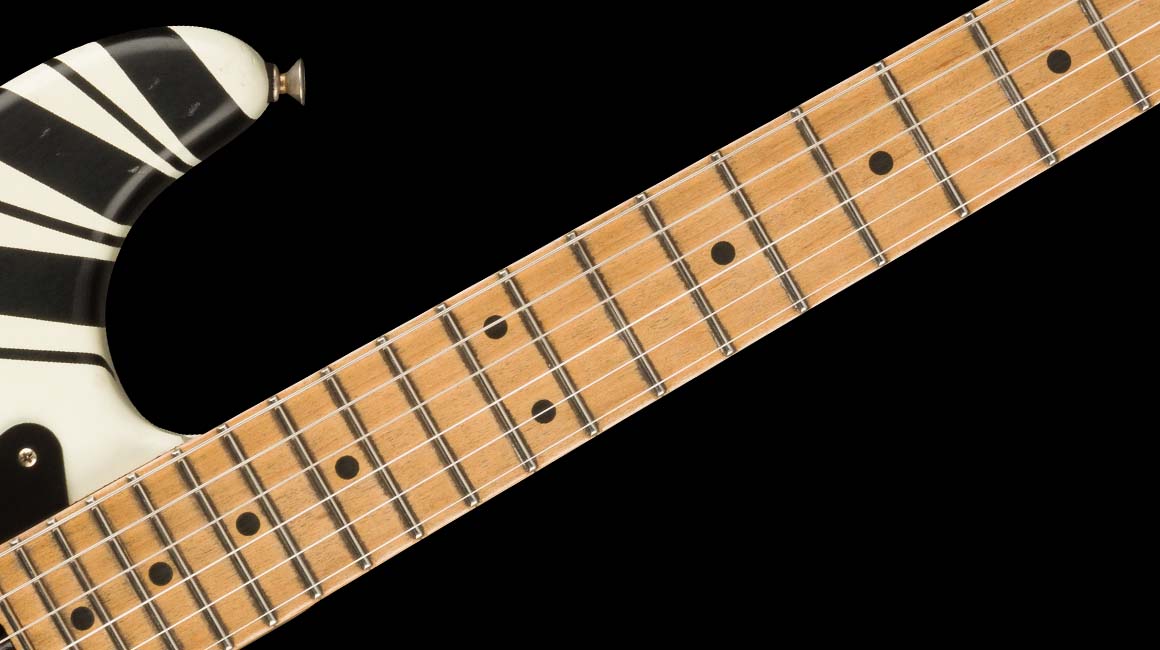 The innovative 12"-16" compound radius maple fingerboard design gradually flattens toward the heel from its smaller and more rounded profile at the nut for unparalleled comfortable chording and riffing near the nut and seamless bending near the heel. Maple is a dense wood that produces bright, snappy tones, articulate notes with bite and a tight low end. Versus a 24-fret neck, a 22-fret layout shifts the neck pickup farther away from the bridge, centering it at the “sweet spot” and resulting in an overall warmer tone. The jumbo fret wire slightly increases the distance between string and fingerboard for seamless and comfortable bends. 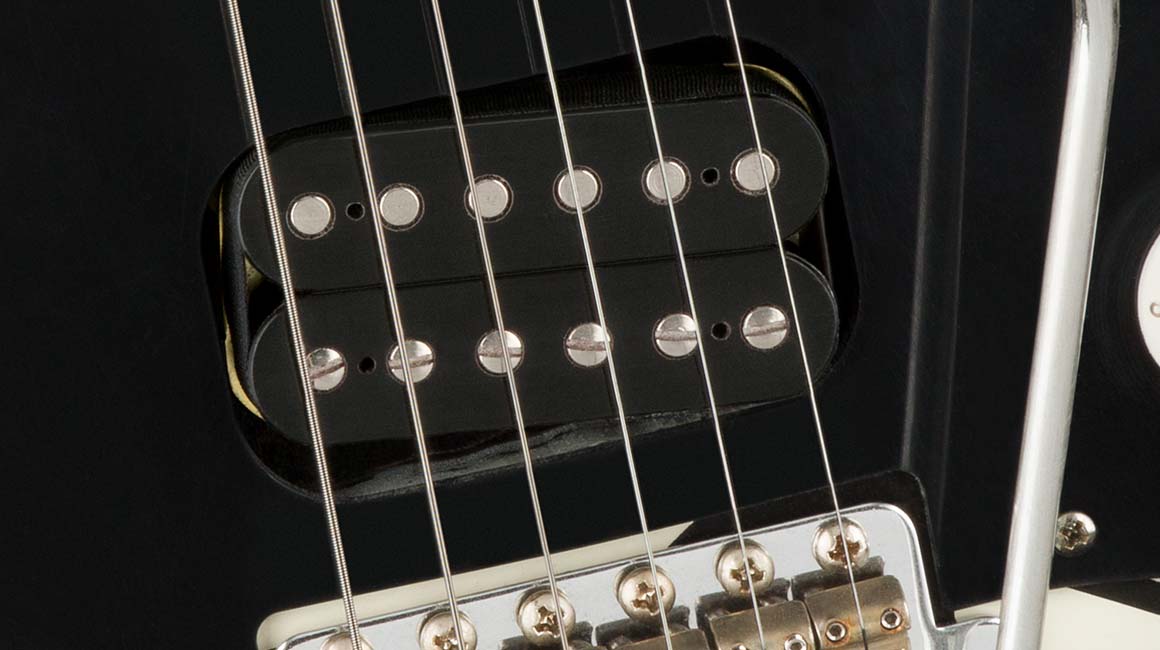 A single EVH Wolfgang humbucking pickup cuts through the mix and provides classic EVH guitar tone — dynamic harmonics, shimmering highs and gritty mids that retain their authoritative tone under high gain. Just like the rest of this guitar, the pickup has been lightly aged. 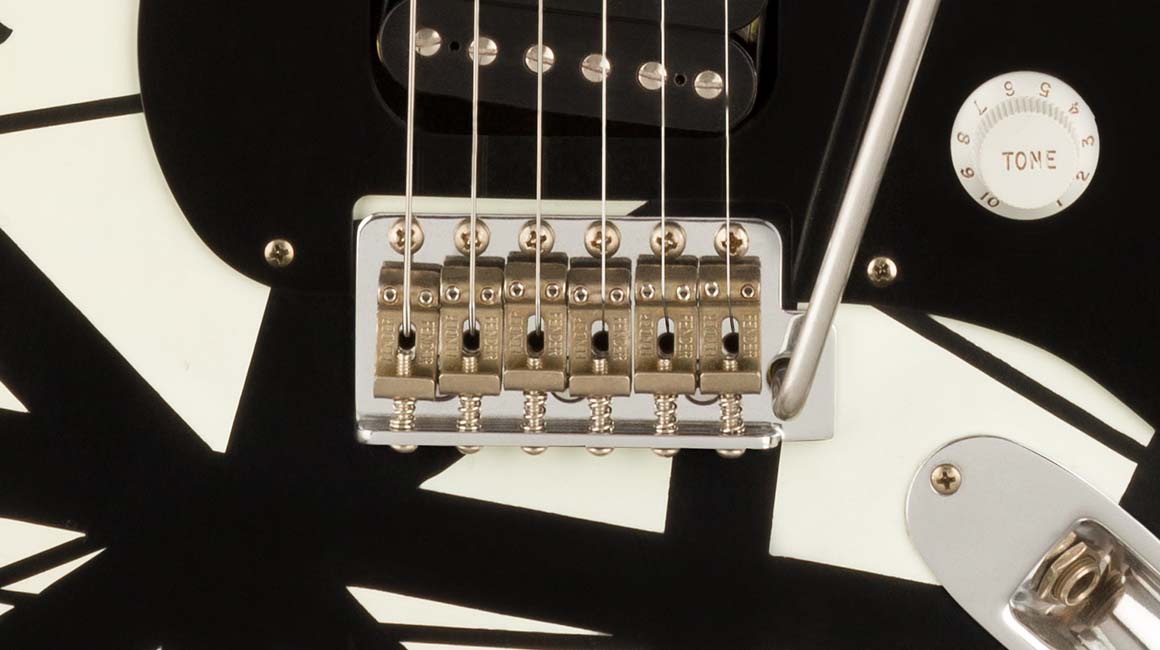 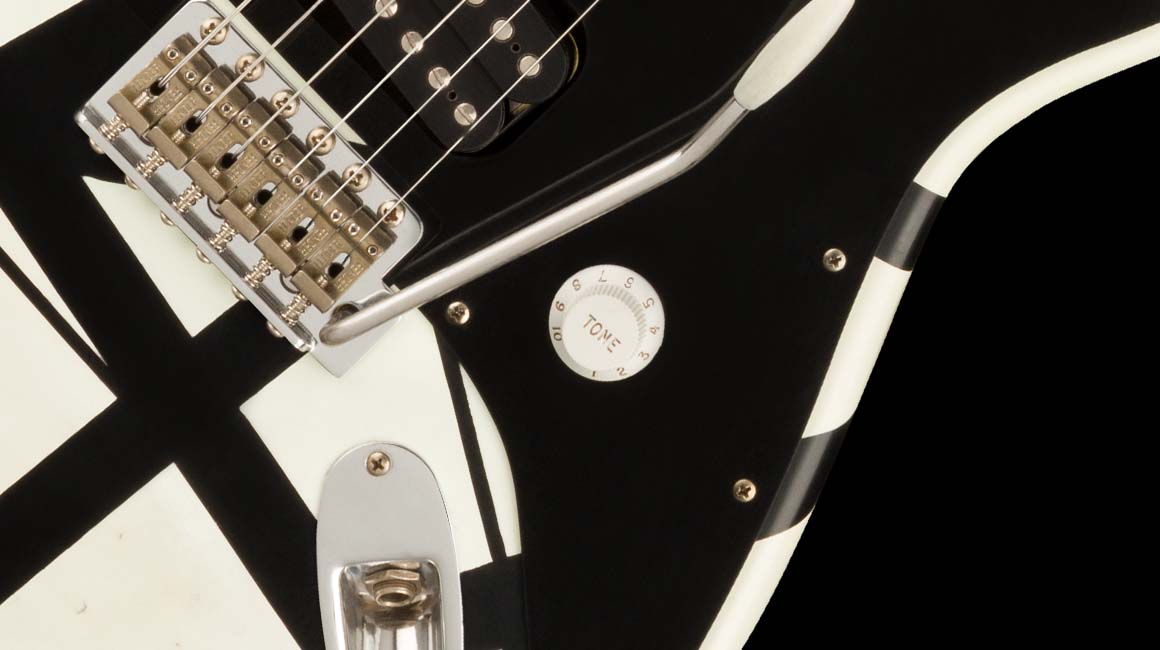 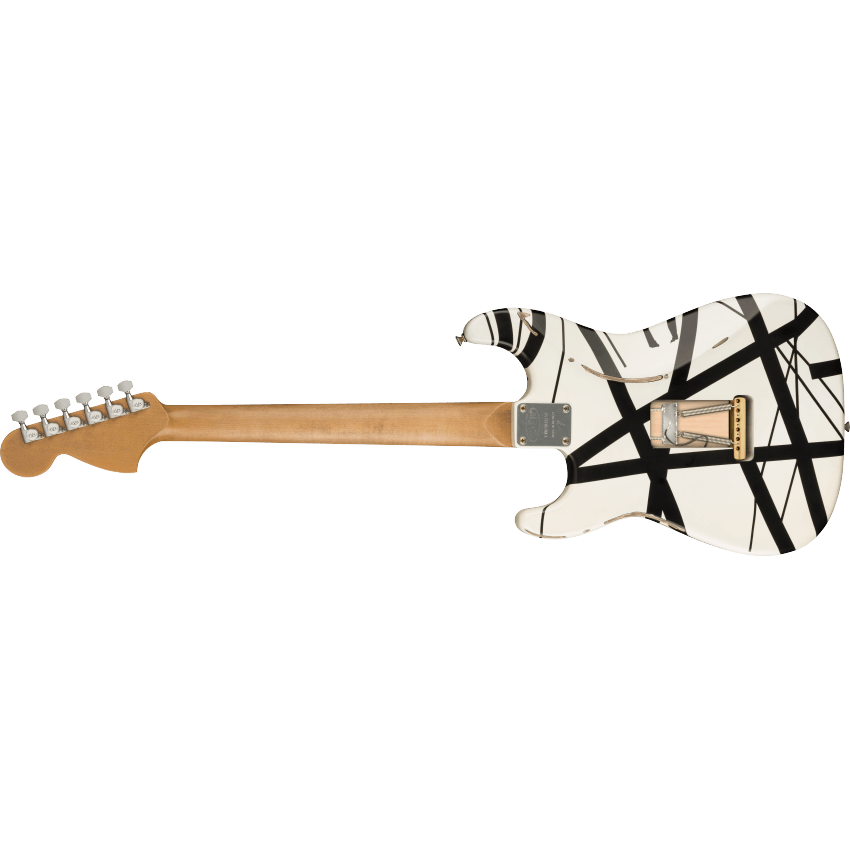 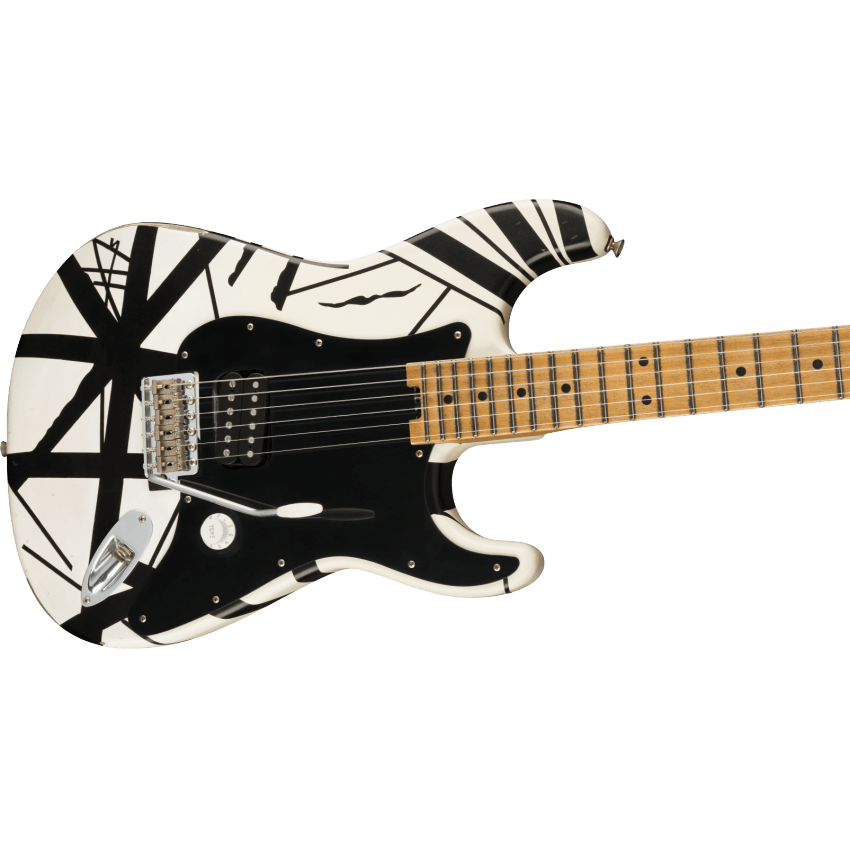 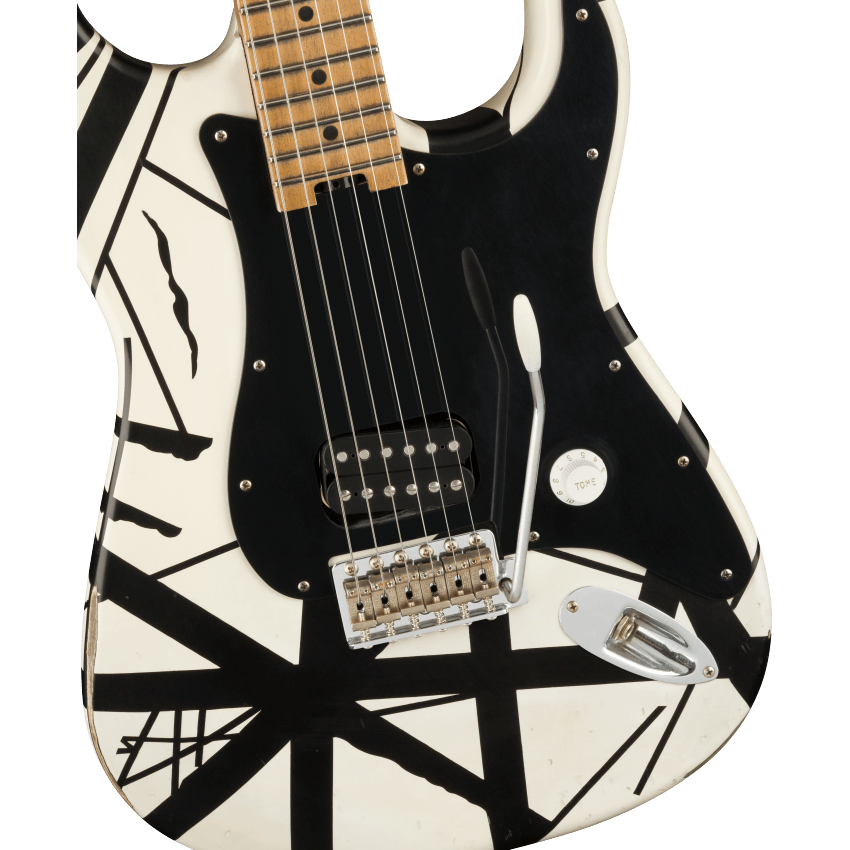 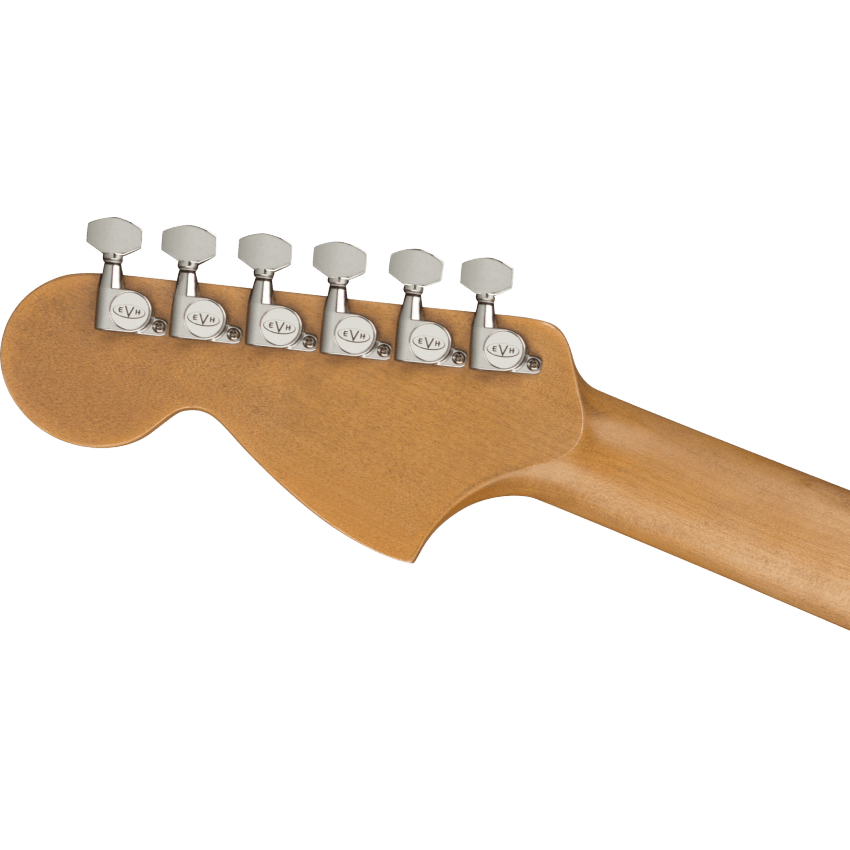 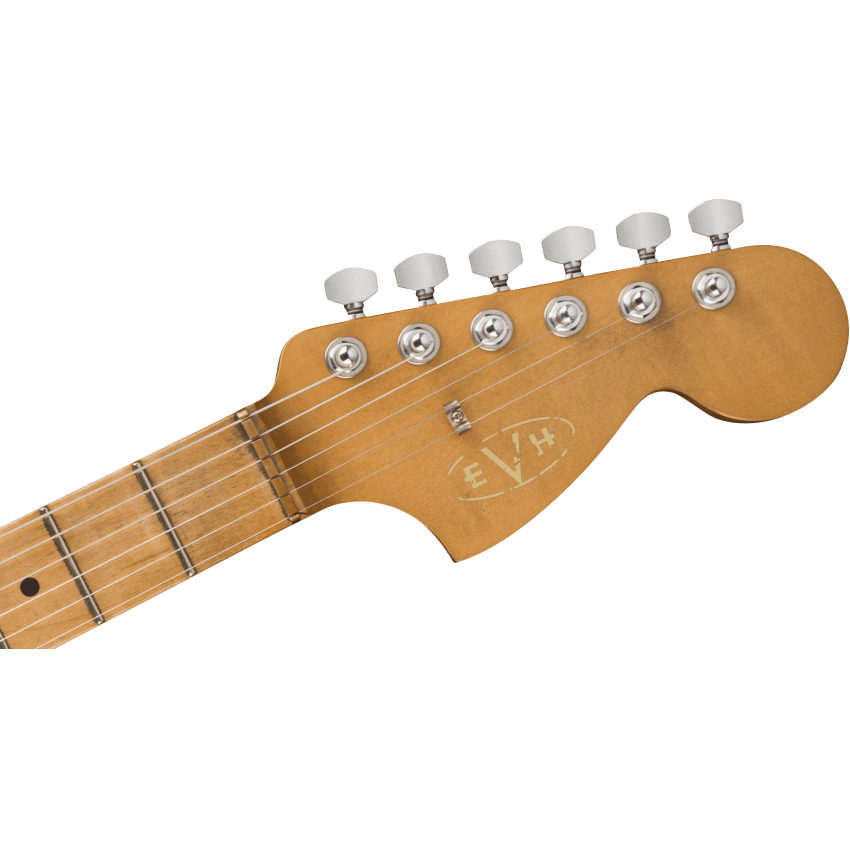